Welcome BLRIS to ELRIS Wiki! You're No. 1 Source of Everything Related to
The Talented Girl Group ELRIS. 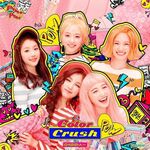 "Color Crush" is the 2nd mini album (EP) by ELRIS. The album contains six tracks including the lead single "Pow Pow". It was released on September 13, 2017.